Well we haven't made any blog posts in quite some time, and since our last post, we've released both our 4th of July and Halloween cats! But what we are also very excited to announce is the release of our newest pattern, Riley the Red Fox! This pattern has taken a very long time, because it kept getting pushed back as we worked on other things. In fact I first got the idea for this fox well over a year ago!

And so with the release of this pattern, we are hosting another giveaway!! This time the rules are a little different... To enter the giveaway, "like" our Facebook page, http://www.facebook.com/pages/Squishy-Cute-Designs/207494659320425 and comment on the post about Riley, saying that you'd like to be entered. The giveaway entry period will end July 7th and we will be drawing the winners on July 8th. Hope you enjoy our new pattern!! 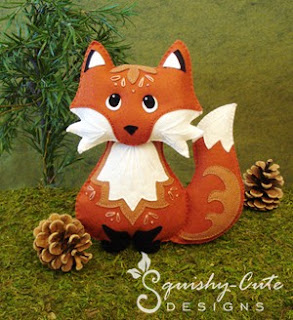 And have a fun and safe 4th of July everyone!!

We finally have a new pattern out: Liberty the 4th of July Dog! This patriotic puppy turned out pretty cute in our opinion! Hopefully you all think so too :) And of course this means we are now working on his friend, the 4th of July Cat. We've already got the pattern for the kitty in mind, so hopefully production on her will go smoothly and quickly. We'd like to have the cat done very soon. 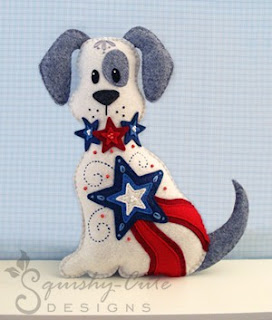 We'd also like to mention that there have been a few exciting additions to our store. We've decided to combine our other Etsy store (Copper Kiwi Designs) with Squishy-Cute Designs. This means we've added our wedding coloring books to our store, and added several new options for these wedding coloring books. We've also added our giraffe fingerprint guestbook/poster, and added a new option: a ladybug version. This ladybug version was as per request from one of our customers, and we think it was a great idea! So in case you have any birthday parties or baby showers coming up, you may want to keep these ideas in mind. They are a fun way to record everyone who attended. 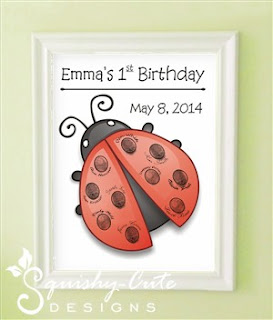 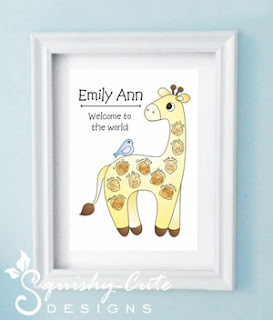 And still on the back burner are some of the other pattern projects we've mentioned, like two different red fox patterns, plus endless other ideas we are excited to start on. But next up keep an eye out for our 4th of July Cat!

Til next time,
Kelli & Greta
Posted by Kelli at 7:17 PM No comments:

We are very excited to announce the release of a new pattern: Flopsy the Rustic Bunny! Flopsy is going to be the first in a collection called "Out of the Attic". We came up with this idea just a few days ago, and couldn't stop working on it until we had the first pattern complete. We think that this bunny would be a cute addition to an Easter basket, or just made as a fun project for any time of year. It's definitely a little different in it's style than our other patterns, but we think that this could be a fun series. What do you think? 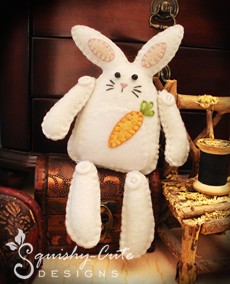 And here is another picture of Flopsy looking ready for Easter! 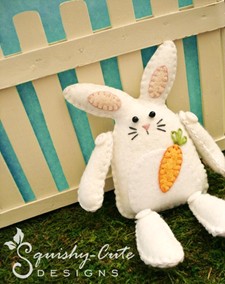 And I've already designed and cut out a fox to go in this series. This is of course a different fox than the one I've been planning for our Woodland collection. I have not given up on that one either!! And of course we have several other projects in the works right now too! So check back in soon, and we may have more new patterns to share. And let us know what you think of our new collection idea and of Flopsy.
Take care :)
Posted by Kelli at 9:10 PM No comments:


Our Rita the Raccoon pattern giveaway has come to a close, and it is now time to announce who won a free pattern! Well, we have some great news! Since we are still a very new store and blog, and not too many people knew about the giveaway, we decided to increase the number of winners to everyone who entered this time!!! Yay!! So here are the winners:


So thank you all so much for entering and for becoming a follower of our blog! We hope you will enjoy creating Rita the Raccoon, and would love to hear what you think of the pattern. And if anyone gets the chance, we would also love to see how your finished Rita turned out!!


Thank you all again so much, and I will be sending your pattern by email as soon as I am done posting this announcement!


Be sure to check back in for more patterns and more giveaways! We have many ideas we are working on and hope to have them completed soon :)

We had a bit of snow last night, which is a little weird since it's March. But it was fun anyway! So we had the slider door curtain open to watch it pile up, and along comes a real life "Rita" the raccoon! We have been seeing some opossums and a few raccoons off in our backyard at night,  but hadn't seen any raccoons hang out this close around our door before. He was searching around for some bread that we had thrown out for the birds earlier, that had gotten covered up by the snow. He was very very cautious, and we both kept peeking around the corner at each other! I was able to get a few pictures of him... 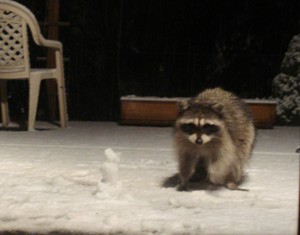 This first one was one of the best. He's posing next to the tiny snowman my husband had made earlier :) 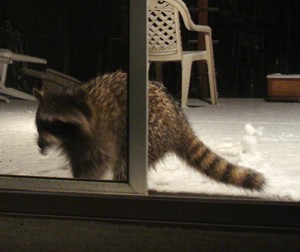 He came pretty close to the door a few times, but only after I held very still!
So anyway, I suppose raccoons aren't that uncommon, but it was pretty fun seeing one so close up, and so shortly after releasing Rita the Raccoon! The only one who didn't enjoy the raccoon sighting was our kitty Pixie! She made it clear she was not a fan, but luckily she was inside with us.
And speaking of our dear Pixie, I uploaded a picture I had taken a little while back around St. Patrick's Day. I thought Pixie should pose with Shamrock! She didn't seem too impressed :P 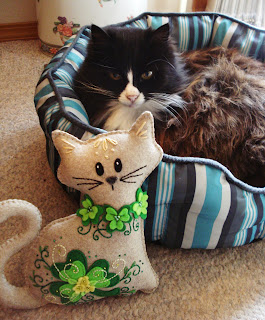 She's a pretty laid back kitty, but then again she is about 12 years old! We got her when I started 6th grade, and she has been my sweet little baby ever since! She's a fun friend to share our work space/sewing area with.
Well anyway, that is all the excitement for now! We are still forming our ideas for the 4th of July cat and dog, and I'm working on a red fox a pattern, while my mom has some cute ideas of her own she's been working on.
Until later then!
Kelli
Posted by Kelli at 8:28 PM No comments:

After a minor set back yesterday (my computer decided to erase a few hours of progress), we are happy to announce that the "Jelly Bean the Easter Cat" pattern is completed and listed in our store! So now Daffodil has an Easter Egg adorned friend! Have a look... 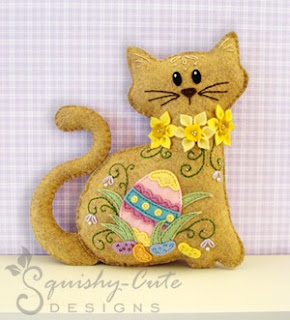 We hope you all like Jelly Bean, and hopefully the Easter set has been a satisfactory sequel to our St. Patrick's Day set. So of course the next set to be released will be the 4th of July Cat and Dog. We have a few ideas worked out, and a general look for both, but this set may be a little more of a challenge to get just the right inspiration. But I'm sure we will get something figured out!
We are thinking we will call them Old Glory and Firecracker. What do you think?
We will post updates as we get further on them. In the mean time, I also plan on making some progress on our red fox pattern. But I will update on that a little more later.
Well let us know what you think of Jelly Bean!! Hopefully she will bring some joy to you this Easter!
Kelli
Posted by Kelli at 9:12 PM No comments:

Hey everyone! We have just finished up a pattern that we had set aside for quite some time now. Does anyone remember Rita the Raccoon? We had originally meant to complete and release this pattern back in November, but one thing led to another, and poor Rita got put on the back shelf. But we have finally gotten back to her, and have finished up her pattern! 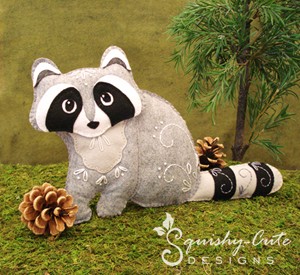 And to celebrate the release of this pattern, we are excited to announce that we will be hosting a giveaway! We will be giving away 5 free patterns, and the winners of these patterns will be drawn randomly. Starting now, we will be accepting entries, and will continue to accept entries until March 24. We will then announce the winners on March 25 and send the winners their free pattern.
To Enter: In order to enter the giveaway, you simply have to become a follower of our blog, and then send us an email at squishycutedesigns (at) yahoo (dot) com, letting us know your name and that you would like to be entered in this giveaway!
Take care,
Kelli & Greta
Posted by Kelli at 9:57 PM 1 comment: